Cari amici, dear Lake Como friends! One of the many celebrities who visited Lake Como belongs a President of the United States of America.

At the end of June 1963 John Fitzgerald Kennedy visited Lake Como. From 1961-1963 was he the 35th President of the U.S.A. and arguably the best-known, most controversial and most popular statesman of the 1960s. 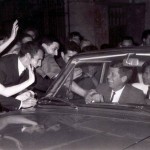 Only 4 days after his historical visit to Germany Kennedy landed on 30th of June 1963 by helicopter in Bellagio in front of the Grand Hotel Villa Serbelloni. There the presidential suite was reserved for him.

JFK was so impressed by the flight over Lake Como and the breathtaking panorama that he said, “This is the most beautiful lake in the world.”

Although Kennedy completed a strenuous journey through Europe, he did not miss the opportunity to greet the residents of Bellagio. He made a trip by car through the city and, of course, he was also received there by cheering people.

Many came with their boats and tried to catch a glimpse from the lakeside on to the charismatic president .

JFK was, after Franklin D. Roosevelt, the 2nd American President to visit Bellagio, the pearl of Lake Como. On 2. July 1963, Kennedy continued to travel to Rome to see Pope Paul VI.

Just a few months after his visit to Lake Como, John Fitzgerald Kennedy was murdered on 22. November 1963 in Dallas, Texas.

Leaving Lake Como and Italy was a farewell forever. But even today, after more than half a century, the memory of John F. Kennedy is still alive.