A Magical Destination for many Cyclists on Lake Como

Cari amici, dear Lake Como friends, summer is the most important season for riding bicycles. You will notice this in any case when you drive by car over the narrow streets of the Lario.

You will have to arrange with the many hobby cyclists and professional cycling enthusiasts, who ride on their bikes equipped with all technical refinements over the steep slopes and past profound abyss.

Of course these traffic obstacles annoy one sometimes. Especially when they occur in groups and you have to travel a few kilometers behind them because the traffic on the narrow streets around Lake Como does not allow the overtaking.

But I admire the effort, the courage and the sporting ambition of these cyclists. 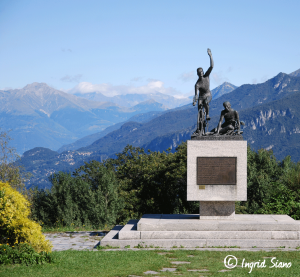 Many of the cyclists on Lake Como have only one goal: the 750-meter-high village of Magreglio which can be reached from Bellagio, Como and Lecco.

The cyclists particularly dread the ascent over the Passo Ghisallo with its slope of 14 percent. The small village of Magreglio, with its 600 inhabitants, serves as a stopover for the tour Il Lombardia and the Giro d’Italia.
This fact demonstrates the extreme achievements of athletes to get here.

I believe after this effort only a few will admire the grandiose panorama and the beauty of the Lake Como landscape. But no cyclist or cycling fan can make it up here without visiting a very special place.

The Chapel of the Holy Madonna del Ghisallo

On the outskirts of the village of Magreglio you’ll find the chapel of the Madonna del Ghisallo, dating from 1623. The Madonna had been the patron of the travelers since an incident in the Middle Ages.

At that time the Count of Ghisallo was attacked by robbers. When he called for help, the Holy Virgin appeared and the bandits fled. In gratitude the Count built the chapel to honor the Holy Madonna del Ghisallo.

On the occasion of an initiative of the village pastor, Father Ermelindo Vigano, the Madonna was proclaimed on 13 October 1949 by Pope Pius XII as patroness to the protection of all cyclists. Since then, the chapel has been a place of pilgrimage for professionals and hobby cyclists from all over the world. 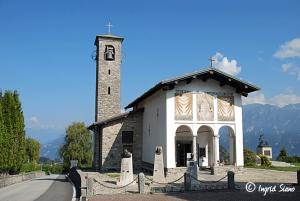 Many of the best-known cyclists have spent the bikes, jerseys and trophies of their competitions as gratitude to their successes. Many of these relics can be admired in the chapel.
I’m sure, you’ll feel the special atmosphere of this place.

On the square in front of the chapel are the busts of Father Emelindo, Fausto Coppi and Gino Bartali, two of the most famous Italian cyclists.

In a small park next to the chapel, a very impressive sculpture symbolizes victory and defeat.
From here you have a fantastic view on to the eastern arm of Lake Como with the huge Grigne massif on the other bank.

Within the sight of the chapel the cycling museum Museo del Ciclismo was opened in October 2006.

This is where the numerous memorabilia of the cyclists are accommodated, which had no place in the Chapel of the Madonna del Ghisallo.
In addition, the history of cycling is presented in a very interesting way in the three-storey building.

Allora, amici, what are you waiting for? Saddle your bike and make your way to the Holy Madonna of Ghisallo.

My tip for all those who are not so saddle-proof and sporty: take the car, the bus or walk up the Passo Ghisallo. The way is worthwhile in any case.