On Lake Como you can forget all your trouble and sorrow. The beauty of the landscape has a positive effect on our souls and the high mountains provide the necessary distance to all inconveniences that weigh us down. This experience made as well the former British Prime Minister Winston Spencer Churchill (1874-1965).

Although he had led England successfully through the 2nd World War with great personal effort, he was deselected as prime minister in July 1945.

The prudent old man did just the right thing! He decided to spend a holiday on Lake Como.

Already in the first week of September 1945, he moved into the Villa „Le Rose“ in the small, picturesque village of Moltrasio. His daughter Sarah, his doctor, and some employees traveled with him.

Churchill described the villa “Le Rose” as a small palace. During his stay, the former Premier received some visitors, but most of the time he spent at his easel.

The very next day after his arrival, his daughter found him painting on the lakeside. Churchill’s doctor, Lord Moran, reported: his patient was so impressed by the views and the scenery of Lake Como that he painted 5 hours without a break.

Churchill himself wrote to his wife Clementine that painting afforded him great pleasure. In this activity he did not think of something else and forgot all his trouble.

Painting means complete distraction for him. He said that nothing occupies the spirit stronger, without exhausting the body. 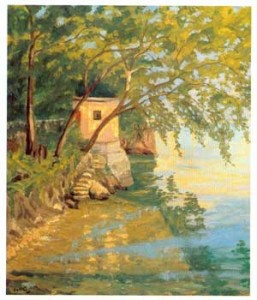 For Churchill Lake Como was “a landscape which exudes absolute tranquility. Neither the region than its inhabitants note the terrible things that happen to the world.”

He tried to capture this idyll and the special, positive atmosphere of Lake Como in his paintings. The Artworks of “Mr. Winter”

Two of his Lake Como paintings were exhibited at the Royal Academy of Arts in London. Churchill signed up under the pseudonym „Mr. Winter „.

Maybe you feel the same way, amici. Every time, when I see an artist with his easel on the shore of Lake Como, I think of this grand old statesman.