Cari amici, dear Lake Como friends, our wonderful Lake Como has always been considered an elite vacation destination by travelers from all over the world. In Germany, Lake Como became particularly popular in the 1950s for a specific reason. 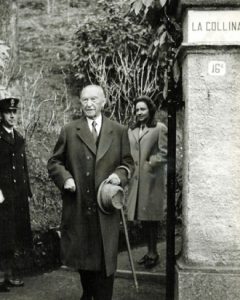 He traveled to the Lario on the recommendation of the then German Foreign Minister, Heinrich von Brentano. The Brentano family had resided in the Tremezzo area of Lake Como since the 12th century.

Adenauer was at once fascinated by the scenic landscape, the imposing mountains, the splendid nature and the old villas with their dreamlike gardens.

He loved it so much that he traveled to Cadenabbia a total of eighteen times, between 1957-1966. At first the Villa Arminio and Villa Rosa served as his vacation domiciles. 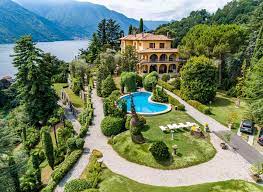 In August 1959 the Federal Chancellor moved to Villa La Collina, located on a hill. The large park of this villa, built in 1899, and the fantastic view on Lake Como compensated him for the lack of comfort.

For example, the missing furniture was borrowed from the Hotel Britannia.
The Chancellor’s staff secretly described the dark living room of the villa as a crypt!

Only the communications technology was brought up to the latest standards for the time. This ensured a constant connection with the seat of government in Bonn, because political business continued for Adenauer even while on vacation.

In addition, there were also appointments with politicians from Germany and abroad as well as visits by journalists and artists such as Golo Mann, Kokoschka, and Graham Sutherland.

Villa La Collina belongs since 1977 to the Konrad Adenauer Foundation and is used for international conferences, seminars, workshops, weddings and other events. Also private vacations are possible at the villa.

The Old Man and the Game of Boccia

The favorite pastime of the Old Man, as he was secretly and respectfully called by his  associates, was the game of boccia. He carried out many competitions with his companions and also with local players. But he was practically unbeatable.

The boccia court was located outside the park of Villa La Collina. Meanwhile two boccia courts were built within the park area for the guests of the villa.

Adenauer always wears a tie and his often caricatured pepitahat while playing boccia. He believed that the exercise of playing boccia was extraordinarily good for him.
For this reason a boccia court was built in the garden of his residence in Rhöndorf near Bonn, Germany. 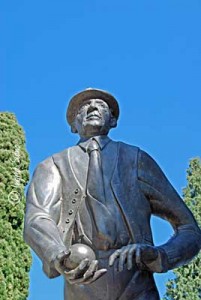 As early as 1957, Adenauer was awarded honorary citizenship of the town of Cadenabbia di Griante. In addition, in 2007 a monument was erected on Cadenabbia’s lakeside promenade depicting the German Chancellor playing boccia. Another Adenauer sculpture is located inside the park of Villa La Collina.

The First Chancellor of the FRG

Konrad Adenauer was the first Chancellor of the Federal Republic of Germany from 1949-1963. He grew up in the founding years of the German Empire and died when the first signs of globalization began to appear.

His vast life experience served him and the German people well in carrying out his difficult office. Konrad Adenauer lived to the age of 91. April 19, 2017 marked the 50th anniversary of his death and was honored at Villa Colina with a special seminar on the life and work of the German Chancellor.

A Walk in the Footsteps of Adenauer

Cari amici, if you are planning a trip to Cadenabbia you should walk there in the footsteps of Adenauer.
After you have welcomed his monument on the promenade, you will reach Villa La Collina via the Via Roma. Then follow the Via Franzani and the Passeggiata Adenauer to the small sanctuary of San Martino.

The 80-year-old chancellor walked this way every Sunday during his vacations on Lake Como to participate in the service.
From San Martino you’ll have a fantastic view on the Lario.

Tip: For the way back take the Via Brentano that passes by the quaint bar Vecchia Torre.

If this walk is too strenuous for you, just play a relaxed round of boccia.

No matter how you decide, I wish you a lot of fun.