Cari amici, dear Lake Como friends! From one of the mountain peaks on the northern shores of Lake Como you can watch how the light green water of the river Adda is flowing into the darker green blue of Lake Como. However, as it is often assumed, the river does not flow into Lake Como, but through it.

At Lecco it leaves the Lago di Como and at Crotta d’Adda it flows into the Po, which takes its water to the Adriatic Sea.

A Factory Town in the Middle of a Nature Park 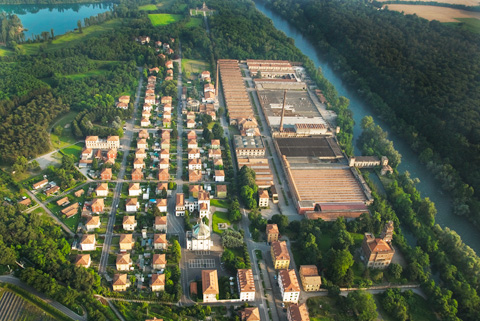 One of the most extraordinary sights on the banks of the river is probably the historic factory town of Crespi d’Adda in the Nature Park Adda North. It is located in the municipality of Capriate San Gervasio in Lombardy.

The settlement was built in 1878 by Cristoforo Benigno Crespi, a cotton producer who was very socially minded and progressive at that time.

A job in the factory was a prerequisite for living in Crespi. The factory was provided with the most modern equipment. It was in operation until the end of 2003. 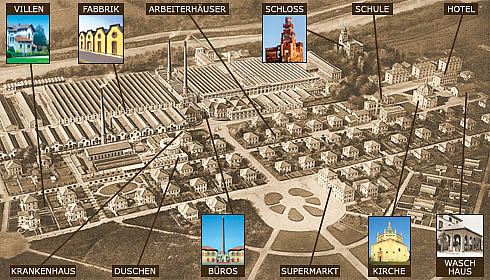 The settlement, built according to the English model, was a well organized and functioning microcosm. The factory workers and their families were offered everything they needed to live, from the cradle to the grave.

Apart from a house and garden of their own, the inhabitants had free access to a hospital, a theatre, a community centre and an indoor swimming pool with hot water.

The school children were provided with all necessary utensils, such as pens, books, and so on.
There was a wash house, which has saved the women the exhausting laundry in the river. And of course the village had a church and a cemetery. Crespi d’Adda was the first place in Italy to have public electric lighting.

In December 1995 Crespi d’Adda was added to the UNESCO World Heritage List as the only example of industrial architecture.

Wouldn’t it be nice if today’s corporations would think and act in a similar social way as Cristoforo Benigno Crespi did 140 years ago? What do you think, amici?